Avelution: Birds in the Development of Darwin’s Theories on Evolution 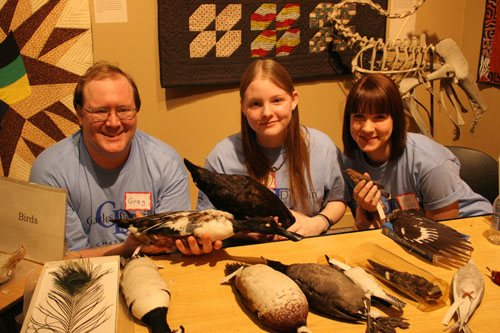 Naturalist Charles Darwin was strongly influenced by avian examples while he was developing the Theory of Evolution by Natural Selection. Birds are vertebrates in Class Aves, so the coined term “avelution” in this exhibition captures the idea of this influence.

When Darwin (1809-1882) was young, few scientists had specialized fields — most were natural historians, studying a broad array of organisms. He was a talented naturalist with broad interests, and although not an ornithologist, he drew heavily on avian examples in the development of his theory. No one has had a greater impact on ornithology than Charles Darwin.

From his time on the Beagle voyage (1831-1836), Darwin identified and described 38 new bird species, the most noted of which, the “Darwin’s Finches,” are frequently cited as a prime example of evolution. He noticed striking parallels between the kind of variation between different, related species that occurs naturally, and the variation that humans can produce among animals (and plants) by selective breeding. Back in England, Darwin kept many pigeon breeds to study selective breeding – a line of scientific inquiry that continues today.

The exhibition will showcase examples of birds from MSU Museum collections, including many species that Darwin encountered in Patagonia; the domestic pigeon and chicken breeds that he studied while he was investigating artificial selection, and a Michigan example of adaptive radiation among finches.

The Michigan State University Museum presents “‘Avelution’ Birds in the Development of Darwin’s Theory of Evolution” in conjunction with its annual family science program, “Darwin Discovery Day,” set for Sunday, Feb. 14, 2010, with an afternoon of hands-on science, discovery.

Register for Exhibition: Avelution: Birds in the Development of Darwin’s Theories on Evolution

Your ticket for the: Avelution: Birds in the Development of Darwin’s Theories on Evolution

Avelution: Birds in the Development of Darwin’s Theories on Evolution