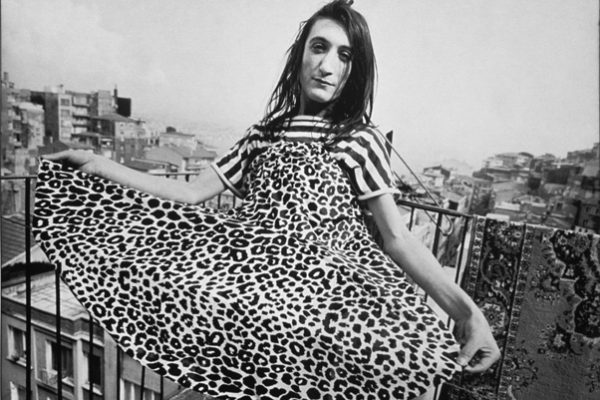 The Transgender Community of Istanbul
January 21 – April 14, 2013
Photographic portraits by Mary Robert, Richmond University, London
(Content intended for mature audiences. Discretion advised.)
Presented in partnership with the MSU Office of Inclusion and Intercultural Initiatives,  MSU Asian Studies Center, Center for Gender Studies in a Global Context,  College of Arts and Letters (Department of Art, Art History, and Design), and the MSU LBGT Resource Center.
An exhibit exploring sexual identity and transition in transsexuals of Istanbul
The photographic works of Professor Mary Robert
This exhibition gives a rare insight into the lives of people in transition – one of the most dramatic and absolute transitions that can be embarked upon by any individual. The photographic portraits explore the complex identities of the members of a community of male-female transsexuals living in Istanbul, Turkey. Robert’s photographs focus on the human qualities of the subjects who have developed a new, unique aesthetic.
Of the reported 2,000-3,000 transsexuals in Istanbul at various stages of transition from male to female, the vast majority exist in difficult circumstances and are often ostracized by their families.
By embarking on this path, they venture into the twilight world of a no man’s land between macho Turkish male culture and that of the liberated glamorous female. Here they live and operate in the shadowy edges beyond the well lit norms of society and its conventions.  As expected in such territory, there is danger, no real protection and plenty of skirmishes and sniping. They are constantly pressurized by the locals, periodically harassed by the police and suffer prejudice from the political system which denies them the right to work legitimately until they successfully convert their blue (male) national identity card to a pink (female) card. This long road of conversion is arduous and expensive. Some work as cabaret entertainers but most survive and pay for their medical treatment by prostitution. In spite of their problems, at home the women are warm, generous, fun-loving people. They provide physical and emotional support for one another with some of the more experienced acting as mentors to new members.
Not all of the community achieve the full metamorphosis to become women; some choose to straddle sexes, some balk at the final irrevocable hurdle, while others can never save the money to be able to afford the operation. If one is not ‘beautiful’, she can neither find work in a club nor be successful as a prostitute. Such individuals may find themselves stuck between sexes forever.
Mary Robert is interested in their everyday private lives when they are at home by themselves and with their friends rather than their public selves as they appear on the streets and in the night clubs. In this body of work she has tried to establish a familial relationship with her subjects, come to know them well, to some extent participate in their lives and to use photography as a means of positive contact between them. These are portraits which sit in the tradition of B&W documentary photography but with the contemporary understanding that the photograph is a 2-dimensional representation of that which has passed. That these are portraits is what is important. In these pictures, the subjects present their being and sexuality in front of the camera; they are fully engaged with the process of capturing their image on film and they are active in the choice of how to be presented. They have embarked on a course of physical change and then have had their new identity denied by most. They constantly renegotiate their true identities. They use photography to reinforce those identities. They use the photo sessions to reinforce their perception of their current identity. They reference photographs from publications such as Vogue, Playboy and Loaded as well as those from porn magazines to construct their self image. They use the photographs of themselves as verification of their progression.
These are not constructed documentary images; they are images of constructed identities.  Although considered as either freaks or exotic aberrations in their own society, Robert’s photographs focus on the human qualities of these women who have strength and charm.
Also debuting a new collections acquisition at the MSU Museum: Ritzenhein-Wilensky Gay Collections Endowment for gay ephemera and art collections to be used for exhibitions, research and programming in partnership with the MSU LBGT Resource Center.
PROGRAMS
Exhibition Opening
Monday, January 21, 2013
4-5:30 p.m.
MSU Museum Heritage Gallery
Presented with Dr. Martin Luther King, Jr. Commemorative Celebration and this year’s theme, “The Road to Social Justice Begins with One Step”
MSU Department of Art, Art History, and Design 2012-1013 Guest Lecture Series featuring photographer Mary Robert
Saturday, February 9, 2013
1 p.m., MSU Union, Ballroom
2-5 p.m., Reception at MSU Museum
in partnership with Midwest Bisexual Lesbian Gay Transgender Ally College Conference (MBLGTACC), Feb. 8-10, 2013 at the Lansing Center

Your ticket for the: East Meets West: The Transgender Community of Istanbul