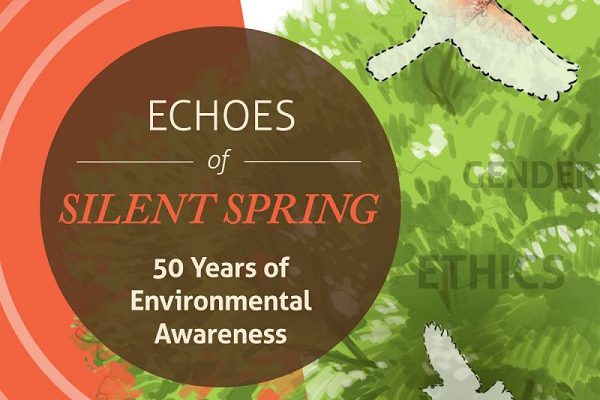 In the modern, human-dominated world, a wide variety of pests threaten our environment, agriculture, and health, and must be controlled. Part of the strategy for controlling pests is the use of chemicals that kill or reduce the numbers of the pest; and 50 years ago, a publication alerted the people of the world to potential dangers in pesticide use. This was the book Silent Spring, written by Rachel Carson and published in 1962.

The MSU Museum revisits the publication of this landmark book, credited with launching the modern environmental movement. “Echoes of Silent Spring: 50 Years of Environmental Awareness” opens in the Heritage Gallery May 29.

“While pesticides are important agents in pest control, they also can carry significant risks if not used carefully and strategically,” notes MSU Museum Director Gary Morgan, the exhibit’s curator. “We now know that some pesticides that were once widely used can be extremely dangerous to organisms other than the target pests.”

As a direct result of the publication of Silent Spring, practices of pesticide use were subjected to much more intense scrutiny and much has changed since then. Most observers say the changes have been for the better, but some suggest the impacts of Silent Spring have been negative. The MSU Museum invites visitors to experience the exhibit, read the book, and be the judge.

Close to home, research presented in the best-seller Silent Spring had a very close connection to Michigan State University – particularly the major case study citing the observation of birds that experienced tremors then death after consuming large amounts of the pesticide DDT as it accumulated in soil, and consequently, in their food source, earthworms. Part of the exhibit showcases ongoing correspondence between Carson and MSU ornithologist George Wallace, whose papers are now part of the Museum’s collections.

Beyond the book itself, “Echoes of Silent Spring” considers many interrelated issues such as environmental sustainability and agricultural practices, ethics, law, and women in science. The exhibit runs through the end of the year, and will also feature multimedia and online educational companions.

“Echoes of Silent Spring” is the major exhibition program at the Michigan State University Museum for 2012, with companion displays developed around campus where environmental research takes place today. The MSU Museum is working with partners across campus to produce the exhibit program, including the College of Agriculture and Natural Resources, College of Natural Science, Lyman Briggs College, College of Veterinary Medicine, Landscape Services and Residential College in the Arts and Humanities.

A campus walking trail shows spots around MSU that were chronicled in the Silent Spring story, and some believe, even providing inspiration for the book’s title.

“As much as anything, Rachel Carson observed that we are not above nature, but are a part of it, that our future is intimately linked with the futures of the waters, the air, the plants and the animals all around us,” Morgan adds. “We face those challenges head-on at Michigan State University, so this is a resonant story for us to share.”

The MSU Museum is the natural science and culture museum at Michigan State University and the state’s first Smithsonian Institution affiliate.

Listen to a “Greening of the Great Lakes” radio interview with MSU Museum Director Gary Morgan, discussing the groundbreaking book, “Silent Spring,” and its connections to MSU.

“Echoes of Silent Spring: 50 Years of Environmental Awareness” is supported, in part, by a gift from Sarah W. Newman.

Your ticket for the: Echoes of Silent Spring: 50 Years of Environmental Awareness