Land of the Feathered Dragons: China and the Origin of Birds 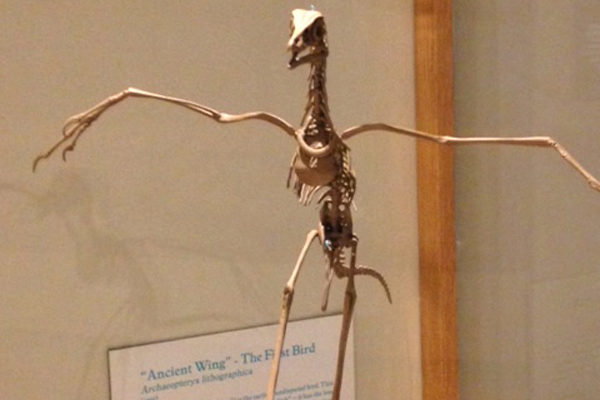 Selections from the exhibit:

In 1861, a fossilized feather, beautifully preserved in 150 million year old limestone near Solnhofen in Bavaria, southern Germany, was discovered. German scientist Hermann Von Meyer named the feather Archaeopteryx, meaning “ancient wing.” More complete skeletons were uncovered later the same year and then in 1867. These fantastic fossils include clear impressions of feathers arranged along the wings and both sides of the tail.

British naturalist Thomas Huxley (friend and confidant of Charles Darwin) studied Archaeopteryx soon after its discovery, and realized that it preserves a remarkable combination of features: the teeth, long bony tail, and clawed fingers of a small dinosaur-like reptile, together with the feathered wings, perching foot, and lightweight hollow bones of a bird. Huxley proposed that birds descended from dinosaurs, but some other scientists of that period were skeptical.

In 1976, Yale University paleontologist John Ostrom wrote a very influential paper laying out the evidence thatArchaeopteryx and the small carnivorous theropod dinosaurs now popularly called “raptors” share a long list of skeletal features. Ostrom concluded, as had Huxley a century earlier, that birds are closely related to theropod dinosaurs. Many scientists were convinced, but there were still holdouts for other viewpoints and the debate continued on into the 1990s. 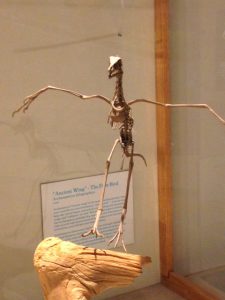 Spectacular Discoveries in China
In 1996, the announcement from China that feathered ‘raptor’ dinosaurs had been discovered in Liaoning Province, east of Beijing astonished the scientific world and the public. The specimens occur in ancient lakebed deposits dating back to 110 – 130 million years ago – younger than Archaeopteryx, but still within the heyday of dinosaurs. Here was the conclusive ‘smoking gun’ evidence for the origin of birds – feathers found on the most bird-like group of dinosaurs!

The discovery of China’s feathered dinosaurs effectively ended the debate over the ancestry of birds. Recent studies consistently conclude that birds are nestled on a twig of the ‘raptor’ branch on the family tree of dinosaurs. The debate now centers on what drove the evolution of powered flapping flight in birds, and on whether any of the feathered dinosaurs could fly themselves.

How many “feathered dragons” exist in China now?
As Chinese scientists have discovered many fossil feathered dinosaurs, some MSU researchers are expanding our knowledge of the biodiversity of living birds in China as well.MSU Museum ornithologist Dr. Pam Rasmussen is part of a team of ornithologists who have just described a new species from Central China, the Sichuan Bush-warbler (a small, dark brown bird that skulks in dense undergrowth). This new species (named Locustella chengi in honor of China’s most influential ornithologist) is hard to see and looks very much like its widely distributed relative the Russet Bush-warbler, but has a longer wing and shorter tail, and sings a much lower-pitched song.

As the science and culture museum at Michigan State University, the MSU Museum is also presenting this exhibit that explores the rich fossil history and biodiversity of China. Check out our Exhibitions page for more current and upcoming China-related exhibitions.

Register for Exhibition: Land of the Feathered Dragons: China and the Origin of Birds

Your ticket for the: Land of the Feathered Dragons: China and the Origin of Birds

Land of the Feathered Dragons: China and the Origin of Birds