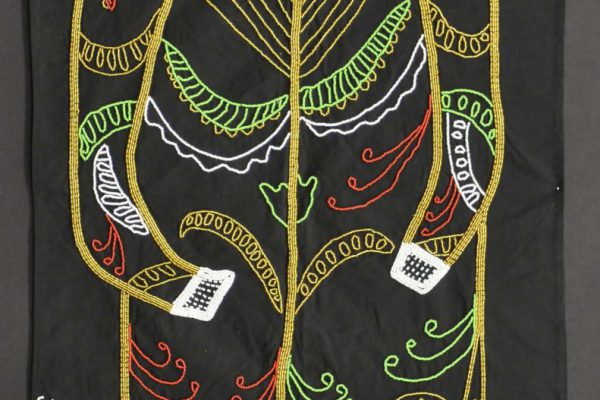 Nelson Mandela has spent a lifetime championing human rights and social justice. Each year, Nelson Mandela International Day is celebrated on his birthday, July 18, with a call to take action to help change the world for the better. The MSU Museum presents a collection of textiles inspired by Mandela with “Materializing Mandela’s Legacy,” on exhibit through Aug. 18.
These textiles by and about South Africa are fundamental sources for understanding Mandela’s legacy and South Africa’s history.
“Textiles have long been made and used to demonstrate solidarity with movements dedicated to advancing international human rights, to mark important events and express memories related to human rights violations,” notes exhibit organizer Mary Worrall, MSU Museum curator of cultural heritage and education team co-manager. “They also pay tribute to those individuals who have played roles in human rights activism, and to engage individuals in actions that will solve human rights issues,” she adds.
Artists within South Africa and around the world have used their textile skills to produce work that paid particular attention to human rights violations of South Africans living under Apartheid and to the actions of Nelson Mandela and other activists who strove to fight Apartheid and establish a new government.
Nelson Mandela International Day was started in 2008, Mandela’s 90th birthday, as a day dedicated to his life’s work and  to ensure his legacy continues forever. Mandela Day is a call to action for individuals – for people everywhere – to take responsibility for changing the world into a better place, one small step at a time, just as Mandela has done.
In addition to the current exhibit, the MSU Museum has had a partnership with the Nelson Mandela Museum in Qunu, South Africa, for a number of years. The Nelson Mandela Museum/Michigan State University Museum Graduate Curatorial Fellowship supports a graduate student in community-engaged research, education, collection management, and exhibition projects. MSU doctoral student Cajetan “CJ” Iheka is in Qunu this summer. His current project at the Nelson Mandela Museum revolves around hosting a Winter School Camp with the theme: “Enhancing Nelson Mandela’s Legacy through Youth.“
Also of note, Nelson Mandela received an honorary degree from MSU in May 2008, just ahead of a special MSU Museum-produced exhibition that opened at the Mandela Museum July 18, “Dear Mr. Mandela, Dear Mrs. Parks: Children’s Letters, Global Lessons.”

Your ticket for the: Materializing Mandela’s Legacy