A Perfect and Absolute Blank: Mapping Mars with the 2020 Girls

In his May 2018 Letter, MSU Museum Director Mark Auslander describes the opening of the exhibit “Martian Design Studio.” Ten young women from New Tech in Lansing’s Everett School have been working with Museum staff and ITEC’s 2020 Girls Program to design a Martian city of the future. How have they envisioned the “blank space” of a Martian colony, and what lessons might we learn from their efforts? 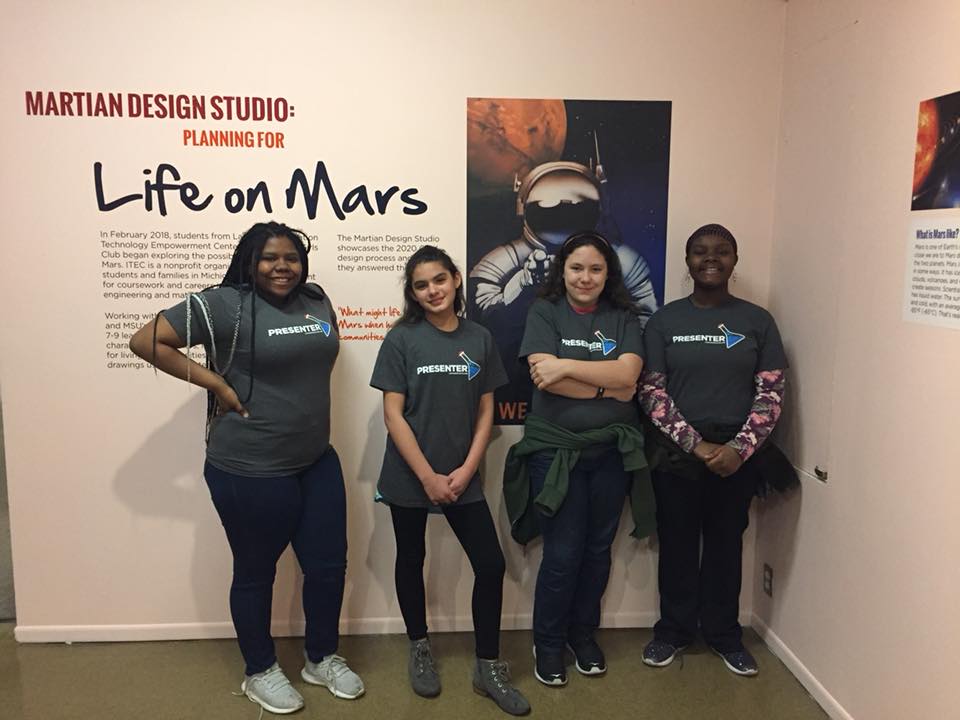 As a child, I adored the nonsensical passage in Lewis Carroll’s “The Hunting of the Snark” describing the captain’s entirely empty navigation chart:

“He had bought a large map representing the sea,
Without the least vestige of land:
And the crew were much pleased when they found it to be
A map they could all understand.
‘What’s the good of Mercator’s North Poles and Equators, Tropics, Zones, and Meridian Lines?’
So the Bellman would cry: and the crew would reply
‘They are merely conventional signs!
Other maps are such shapes, with their islands and capes!
But we’ve got our brave Captain to thank: (So the crew would protest) that he’s bought us the best – A perfect and absolute blank!'”

Like many of Lewis Carroll’s absurdist whimsies, the image of the empty map may convey a serious philosophical point. As in the age of exploration, blankness here signals the infinite promise of the New World unconstrained by the histories or encumbrances of the Old World. Even the “conventional signs” of mapmaking, which speak of the iron cage of grid systems and rigorous mathematical plotting, can be escaped in the marvelous openness of the blank chart.

I found myself thinking of those lines during the MSU Science Festival, as we opened our “Martian Design Studio” in the Museum’s second floor Art-Science-Creativity Gallery. The event culminated our semester-long project, described in my March 2018 letter, with ten 7th – 9th grade young women from Lansing’s Everett’s New Tech school in conjunction with ITEC’s 2020 Girls Program. On a wall, we placed a large image of an empty Martian landscape, inviting young visitors to fill it up with yellow post-its illustrating the one thing they’d want to include in their Martian city. Children drew space suits for pet dogs, cats, and bunny rabbits; one boy carefully sketched a space alien, whom he hoped would be his best friend on Mars. They gleefully stuck their pictures on the poster, filling up the blankness.

The impulse to populate blank spaces with visual stories may be among the most ancient of human desires, dating back at least to the painted cave walls of the Upper Paleolithic. It is a tendency parodied by Jonathan Swift in his sardonic dismissal (1733) of early mapmakers:

Our 21st century design team faces a very different set of predicaments than Swift’s 18th century European mapmakers. Swift’s contemporaries were ignorant of the basic physical features of the landscapes they sought to represent, and thus placed “elephants for want of towns.” Our future astronaut-explorers have at their fingertips detailed photographic and radar-derived maps of nearly every square mile of the Martian surface beamed back by the Mars Reconnaissance Orbiter, the European Space Agency’s Mars Express, and other probes, as well as data sent back from the Spirit and Curiosity robotic rovers. Thus, the students can have informed debates over whether to place their first city near an ice cap, on the slopes of Olympus Mons, in the equatorial Gusev Crater (explored by Spirit), or on the plain Acidalia Planitia, where the fictional astronaut Mark Watney was stranded in The Martian. The blankness our designers need to fill with their visual stories is of a different order than that faced by earlier generations: they know the physical details of where they are heading, but still have to invent the social, cultural and philosophical premises of their new world.

After weeks of drawing out their plans with pencil and paper, and then on the computer application SketchUp, four members of the team gathered in the Museum to present their ideas to hundreds of children and grown up visitors to the Science Festival. They were nervous at first, but quickly warmed to the topic, bravely laying out their vision of life on Mars in the 2070s.

Mykenzi in her designs presented a technology innovation center at the heart of the new Martian city. It will be vital, she told us, to keep on inventing new devices and systems, rather than depending on whatever the colonists bring with them from Earth. Special robots, she insisted, will need to be designed and built right there to accomplish tasks unanticipated by earth-based engineers.

Jada shared her designs for an athletics and fitness center, filled with activities that will counteract bone loss experienced in low-gravity environments. In rapid back and forth exchanges with visitors, she dreamed up a new Martian Olympic sport, “Trampaloon,” inspired by J.K. Rowling’s Quidditch in the Harry Potter universe and by the Battle Room of Orson Scott Card’s Ender’s Game. The game takes place in a grand circle of trampolines located across the crater floor outside of the dome. Wearing space suits as they bounce higher and higher on the trampolines, contestants aim for high floating balloons and knock them through the opposing teams’ goalposts. This will teach kids low gravity navigation skills and how to plot strategy several steps in advance, which could, everybody agreed, be a life-saving talent during an emergency on Mars.

Dacharra in turn has designed a kind of store or distribution center, her emphasis is on bringing a sense of beauty and style into every aspect of life on Mars. All the girls agree that NASA’s spacesuit designs are far too dull and uniform. “We want to express our individuality and personality, on all our space suits!,” said Neveah. Dacharra chimed in, “We are going to deck suits out with space bling!” Why shouldn’t we all look fine, out there climbing up and down on the Martian surface?,” she said, between exuberant laughs.

Neveah explained the team’s hope to create a city without money. “Most people argue over money, so we are trying to come up with a trading system, where people just do things for each other.” Mykenzi in the technology innovation center would be willing to create a robot specially designed for climbing Olympus Mons if Dacharra would give her five excellent haircuts over the coming year.

Many of the debates were over the relative merits of freedom and constraint on Mars, for humans and non-humans alike. One visiting girl suggested that bunny rabbits, which she loves, should be allowed to run freely all over the domed city. Jada was hesitant: “If they chew through the tubes in the hydroponics lab, we’ll all die of starvation.” Neveah, in turn, noted that while most of the time it will be best to let little kids learn freely from experience, some regulation will be required. “Think about learning the lesson about not taking your space helmet off when you go outside of the dome. Sure, you could let them learn that through experience, but then that would be the last experience they’ll ever have,” she exclaimed, as the girls hooted with laughter.

Amidst all the hilarity, the design team grappled with serious issues. At the start of the planning process, they had been worried about what kind of people they would let into the city from Earth. Some had heard on television that Russians were dangerous and wanted to hurt our country, but after discussion they decided that the city should have people from all over the world, who would learn to work together and serve as an inspiring model for nations back on Earth. (They have been studying the International Space Station, which has hosted astronaut representatives from fifteen countries.) Maybe, Neveah suggested, we should invent a new language that everyone can understand? The girls were excited when we told them about Esperanto, the carefully designed universal language of the early 20th century, and wondered if they could reintroduce it on Mars.

Art and Science Meet on Mars

Each generation of explorers travels not only in space but in imagination, shaped by the shadows, echoes, and perils of the society they have left behind. Inevitably, they project upon the blank chart of each approaching New World the inverse of the Old World receding from sight. Consciously or unconsciously, each utopia dreamed of just beyond the horizon dramatizes the dystopias of the past.

What are our young designers leaving behind? What do they project upon their blank canvases as they contemplate the red planet? They are painfully aware of the environmental perils the Earth faces. They are all too conscious of the strife that comes from money, greed, and rampant materialism. Every day on television they are reminded of the dangers of prejudice, intolerance and international conflict. On the blank space of the Martian map they are designing a society based on cooperation, mutual respect, and the careful balance of collective well-being and individual self-interest.

I am particularly delighted that they are insisting on a city in which aesthetics will be celebrated. From space suits to shoes to coiffure, their Martian colonists will be decked out with elegance and a sense of style. It is hardly that the young women are turning their back on the quest for marketable job skills (Jada explains that through working with SketchUp she has decided she wants to major in engineering in college, and eventually design gravity-free structures in space for NASA). But they are insisting that we all need to live on more than technology alone. Art matters.

How marvelous that the 2020 Girls Design Team is filling up their Martian “Perfect and Absolute Blank” with beauty, exuberance, and pizzazz, along with radiation-protection domes and hydroponic laboratories. We can hardly wait to see what they will come up with next!

Your ticket for the: A Perfect and Absolute Blank: Mapping Mars with the 2020 Girls

A Perfect and Absolute Blank: Mapping Mars with the 2020 Girls

USD
As MSU continues to evaluate the safety of our campus and community in response to COVID-19, we have made the decision to close the MSU Museum. Due to the rapidly changing nature of the situation, we have not determined a reopening date. We will continue to communicate updates as they become available. During this time, we will do everything we can to stay engaged with you virtually. Access virtual learning and activity resources