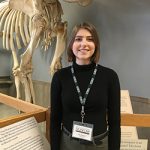 Ally Brown is a student docent at the MSU Museum. She is originally from Grand Rapids, Michigan. Ally is in her sophomore year at Michigan State University in the Department of Integrative Biology. Her work at the Museum is focused on visitor services, including introducing groups to the MSU Museum. Ally became interested in becoming a docent because she enjoys the environment of museums, and she wanted to connect more with the MSU and East Lansing communities.

After working as a docent at the MSU Museum for two semesters, Ally’s favorite part of her work is interacting with guests of all ages and helping them make connections with the exhibits. She especially enjoys making new discoveries and learning from Museum visitors.

Her favorite displays at the MSU Museum are the dioramas in Habitat Hall featuring seven life-sized habitats depicting the environments of North America including forests, grasslands, deserts, tropics and the tundra. The habitats focus on various members of the deer family and their adaptations to different environments. Ally appreciates the dioramas because they highlight the diversity of life and explain threats that particular habitats are facing, such as deforestation and desertification. She hopes that after learning about threats to habitats Museum visitors are inspired to help protect the environment. Ally’s own research area is focused on prairie restorations and the impact of invasive species on the communities within them.

Eventually Ally would like to work as a restoration ecologist at an institution that allows her to research the effectiveness of the restoration methods she implements. In her free time Ally enjoys reading, cross-stitch, and spending time in natural areas.

Your ticket for the: Ally Brown