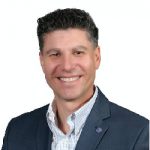 Director of the MSU Museum and Science Gallery

Previously, Devon served as a Senior Consultant with the DeVos Institute of Arts Management at the University of Maryland. His work included providing organizational guidance and support on artistic and strategic planning, community engagement, institutional and programmatic marketing, fundraising, and board development for a wide-range of cultural institutions from across the United States.

Prior to that, Devon served as the second director of the Arab American National Museum (AANM). He joined the AANM as curator of community history shortly before the museum opened in 2005; was promoted to deputy director in 2009; and was named director in 2013. As director, Devon established new relationships with individuals and organizations that resulted in the expansion of the museum’s mission and programming throughout the nation. Devon also oversaw the physical expansion of the museum with the creation of the Annex, a new community arts space immediately adjacent to the Museum, and an artist-in-residency unit in the neighboring City Hall Artspace Lofts.

Under his aegis, the AANM was named an Affiliate of the Smithsonian Institution, a member of the National Performance Network, and an internationally-recognized TAKREEM Laureate for Cultural Excellence. Devon also helped lead the AANM through both the Museum Assessment Program (MAP) and Accreditation from the American Alliance of Museums. This was a major accomplishment given the museum achieved Accreditation, the museum field’s mark of distinction, on its first attempt and within 10 years of opening the museum to the public.

Devon is a board member of the American Alliance of Museums and Artspace. Previously, he served on boards or advisory committees for CultureSource, Kresge Arts in Detroit, Smithsonian Affiliations, Detroit Symphony Orchestra, Detroit Institute of Arts, East Dearborn Downtown Development Authority, and the Ann Arbor Public Art Commission, among others. Additionally, Devon has served on several national grantmaking review panels, including those for the National Endowment for the Arts and the Institute for Museum and Library Services.

Devon earned his Master of Science in Historic Preservation at Eastern Michigan University. He is a graduate of the Michigan Nonprofit Association’s Emerging Leaders Class IX and Leadership Detroit Class XXXIV. In 2013, he was named one of Crain’s Detroit Business magazine’s “40 Under 40” business leaders. In 2016, Devon was named one of twelve American Express NGen Fellows with the Independent Sector.

Your ticket for the: Devon Akmon