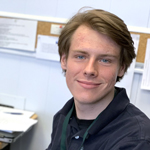 Originally from Hudsonville, Michigan, Parker is in his senior year at Michigan State University with plans of graduating in fall 2020. He became interested in working at the MSU Museum because he wants to help develop content for Science On a Sphere, which he believes, opens itself to many creative and scientific opportunities.

His favorite current exhibit at the MSU Museum is the 1400 pound 10.5 foot tall brown bear on the second floor in the “Hall of Animal Diversity” exhibit. Parker says he enjoys working at the Museum because the Museum staff are passionate about their work.

After graduation Parker would like to pursue a career as a filmmaker. In his free time, he enjoys watching movies.

Your ticket for the: Parker Eisen