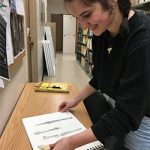 Rachel Alcorn is working on a honors project at the MSU Museum. She is using bird specimens from the Museum’s Natural Science Collections to draw and measure the bones of different seabird species to create an identification key. Rachel is majoring in Zoology with a concentration in Marine Biology and a minor in Marine Ecosystem Management. Originally from West Bloomfield, MI, Rachel is in her junior year at Michigan State University. Rachel became interested in this research project after talking with Dr. Pamela Rasmussen (MSU Museum’s Assistant Curator of Mammalogy and Ornithology; and Assistant Professor in the MSU Department of Integrative Biology) about an honors option for Marine Biology that would combine art and science.

She says that the best part of her work at the Museum is drawing the specimens from direct observation and seeing the osteological similarities and differences between bones of different species. Her favorite exhibit at the MSU Museum is the Hall of Evolution because she has a passion for collecting fossils like Petoskey stones. She enjoys seeing the fossils identified in the Museum and learning about their history.

Eventually, Rachel would like to become a marine biologist. In her free time she enjoys collecting seashells and rocks. She also likes to paint, draw, and watch horror movies.

Your ticket for the: Rachel Alcorn