I’ll be Back: Celebrating the “Terminator” and the Winter Solstice through Science On a Sphere

In his December 2019 letter, MSU Museum Director Mark Auslander ponders the ways in which Science On a Sphere, the Museum’s newly installed technological marvel, helps illuminate the dynamics of the approaching winter solstice. As we enter the darkest period of the year, Science On a Sphere is a powerful spark of light and creative insight, reminding us of the curious paradox that manifest illusions sometimes provide glimpses of the greatest truths. 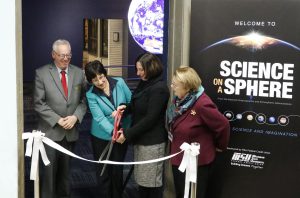 As we enter December, the days are growing shorter and colder, but at the MSU Museum, we find our hearts increasingly warmed with our newest “holiday gift,” Science On a Sphere. Developed by scientists at the National Oceanic and Atmospheric Administration (NOAA), Science On a Sphere (“SoS” for short) is a five-foot globe surrounded by four elaborate projectors that transform the sphere into a spherical screen simulating a planetary body spinning in space. Our visitors can control the system though a dynamic touchscreen that calls up data from hundreds of NOAA and NASA satellites and other high-tech “remote sensing platforms.” One moment we see a year’s worth of hurricanes at high speed, the next we see the real-time swirling of atmospheric chemistry across the planet. Another touch summons the rotating majesty of the planet Mars or an exoplanet orbiting a distant star. We can track sea turtle migrations across the north Pacific and bird species migrating between North and South America. SoS takes us on journeys to deep sea trenches, glimpsing recently discovered life forms existing far beyond the reach of sunlight, nourished improbably by underwater heat vents; into projected futures, watching anticipated sea level rise around the world; and into the distant past, viewing in reverse tectonic movement of the continents from the present moment all the way back to 750 million years ago. Every day we find ourselves, along with our astounded visitors, positively giddy with excitement and astonishment over the Sphere’s capabilities.

Points of Light
Watching everyone marvel over this steadily turning illuminated globe, as we enter the least-lit phase of the year, I find myself thinking of the Sphere as the ultimate yuletide bonfire, a kind of promissory note against the encroaching darkness. For millennia, in cultures the world over, the approach of the winter solstice, as the sun seems to stand still at its lowest point in the celestial vault, has inspired human communities to gather together to create light, as if to call into being the hoped-for return of the sun. The death of the old year is unstoppable, but gathering together, we express one of our deepest aspirations, our faith in the return of life and the rebirth of the calendar. This faith is perhaps the oldest of human spiritual sensibilities, a mystery that sustains us in the darkest of times. Out of death, time and time again, comes the regeneration of life, as spring follows winter. Perhaps it is for this reason that many of our paleolithic ancestors ventured into dark caverns, armed only with torches illuminating brilliant creatures painted on cave walls, to celebrate the enduring power of life over death. For countless generations, we have gathered in the darkness and the cold around the campfire to share stories of tragedy and heroism, reminding ourselves that while individual lives always pass in time, lineages and communities endure. Each winter solstice, paradoxically, occasions a carnival of feasting, the sharing of gifts, and the singing of epic tales, as we collectively gaze across the horizon towards the sun’s return.

The orientation of the terminator between the northern and southern hemispheres depends on the season. On the spring and fall equinoxes(around March and September 21), there is no tilt of the Earth with respect to the Sun so the terminator line is parallel with the axis of the Earth and with the lines of longitude. Wikimedia Commons: https://commons.wikimedia.org/wiki/File:Seasonearth.png#file

The Solstice Cometh
As it happens, Science On a Sphere, our ultra-modern, digital campfire, helps us understand the underlying dynamics of the solstices themselves. One of NOAA’s animated dataset for the Sphere shows the changing shape of the “terminator” or “twilight zone,” the line between day and night, over the course of the year. At the fall and spring equinoxes (which respective fall each year on September 20-21 and March 22-23) when the sun appears to be directly above the equator, day and night are approximately the same length. To clarify, every moment of the year, more or less half of the earth is bathed in sunlight and half is in darkness, but only during the equinoxes do people living in temperate regions experience days and night of equal duration; this is because only at each equinox is the line of the terminator parallel to Earth’s axis. Over the course of the next three months, the terminator will gradually tilt more and more, finally reaching an angle of 23.5 degrees away from the planet’s axis. These two moments each year, when the terminator is at its maximum angle tilted away from the planet’s axis, are what we term the winter and summer solstices (respectively, December 21-22 and June 21-22). At the moment of the winter solstice, of the terminator’s maximal tilt, a greater proportion of the northern hemisphere is covered in darkness than in sunlight than any other time of the year. (Many thanks to our planetarium director Shannon Schmoll for explaining these dynamics.)

Winter is Coming
Following the fall equinox the winter solstice approaches in the temperate regions of the northern hemisphere, the earth’s surface receives the greatest proportion of darkness each day. (Meanwhile, in the southern hemisphere, the equal tilt of the terminator in the other direction means that the earth’s surface receives an ever greater proportion of sunlight in each 24 hour period.) Here in Michigan, or other temperate climates of the northern hemisphere, this growing extended period of darkness is the primary cause of increasingly cold weather after the Fall equinox each year, a phenomena that extends for months after the terminator begins to tilt back towards the earth’s axis. It is deeply fascinating to watch on Science On a Sphere as the terminator’s angle shifts back and forth over the course of the year, hearkening the annual round of the seasons.

The Sphere thus allows us to see through an illusion that held spell over humanity across untold generations. For our distant ancestors, who assumed the Earth was the stationary center of the universe, it appeared as if the sun itself hung low in the sky, slowed down and then suspended itself in its motion, at each winter solstice. In fact, we now understand, the earth itself is moving in orbit around the sun, and the nature of the planet’s orbital revolution in a great ellipse produces the changing angle of the terminator relative to the earth’s axis, giving us the illusion that the sun’s daily progression itself is rising or falling across the sky. 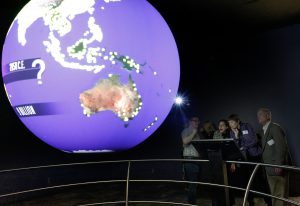 “Science On a Sphere” Gallery

The Truth of an Illusion
The fascinating irony is that our Science on a Sphere display, which allows us to see through this ancient illusion, is itself produced by an illusion. Our brains insist on reading the Sphere as a rotating planet, but it is of course only a static, lightweight ball of polycarbonate attached to the ceiling by three thin guide wires. Sophisticated computing algorithms allow the four projectors to blanket the sphere in four quadrants, seemingly integrating carefully aligned moving impulses of light to convince us that we are really watching the earth in motion as the terminator changes its angle relative to the earth’s axis, in a rapid simulation of the actual annual cycle.

As we approach the winter solstice, we have been thinking at the Museum of how we might use the Sphere to celebrate the varied ceremonies through which human cultures have long celebrated the annual rebirth of the year, granting ourselves the ultimate illusion that our actions help impel the return of warmth and illumination to our world. We might create a visualization of the outer flat faces of three massive stones of the great “trilithon” of Stonehenge, which for millennia have stood pointed directly towards the sun during the winter solstice. Perhaps this intricately designed megaliths strengthened the claims of a priestly elite that they helped guide the land towards the return of spring. Perhaps we might project on the globe objects from Hanukkah or Kwanzaa, echoing the ancient sensibility that the illumination of burning oil or candles heralds the return of light to the world.

More playfully, we might even turn the sphere into a giant snow globe, offering a bright vision of the mythical city at the North Pole, from which gifts, we tell our young ones, radiate out each midwinter to all good children across the midnight sky. Alternately, we might show an animation of NORAD’s famous Christmastime radar tracking of Santa’s global voyage to every chimney of the world. Or we could even fill the sphere will projections of all the Santa Claus masks in the Museum’s voluminous collection. On the eve of the shortest day of the year, something impels us towards the life-affirming joy of humor and make-believe, and this great truth, appropriately, is powerfully demonstrated through our beloved arena of illusion, our seemingly-spinning Science On a Sphere itself.

Your ticket for the: I’ll be Back: Celebrating the “Terminator” and the Winter Solstice through Science On a Sphere

I’ll be Back: Celebrating the “Terminator” and the Winter Solstice through Science On a Sphere