The MSU Museum was awarded $150,000 from the MSU Federal Credit Union for Science on a Sphere. The MSUFCU will also continue its support of the Museum’s preschool program and the annual Dinosaur Dash 5K race.

Developed by the National Oceanic and Atmospheric Administration (NOAA), Science on a Sphere displays the earth’s four quadrants in 3D and enables visitors to 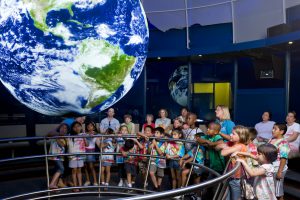 experience atmospheric events on earth as well as on other planets and moons in our solar system, many of them in real time. The database stores real time patterns for a month, but also contains information from historic events, such as the 2011 tsunami that struck Japan, or development of Super Storm Sandy in 2012. The five-foot diameter sphere is suspended by near-invisible guide wires and is the target of four precisely-aligned projectors. The sphere illustrates everything from the spread of global influenza, Facebook usage, to glacier retreat.

“Science On a Sphere (SoS) is a terrific facility for visualizing the complex datasets typical of forefront research in the College of Natural Science, ranging from the structure of the cosmos to climate variations on a global scale,” said Phillip Duxbury, incoming dean of the College of Natural Sciences and MSU Professor of Condensed Matter Theory. “SoS translates these enormous data sets into clear and concise images that are accessible to K-12 students and the general public. We are grateful for the generosity of the MSU Federal Credit Union which will make this facility a reality for the MSU community.”

“MSUFCU is pleased to expand our partnership with the MSU Museum to bring Science On a Sphere to our community, said April Clobes, MSUFCU’s President/CEO. “Access to this technology will provide the opportunity for many faculty and students to achieve academic success.”

On the strength of this generous challenge gift, the MSU Museum will pursue a fundraising goal of $100,000 in Fall 2018, to prepare the gallery for the system. Needed improvements include an air-conditioned control room to house the computer servers and other devices needed to run this sophisticated array. The current first floor Heritage Gallery space will house the sphere, to be renamed “The MSU Federal Credit Union Science on a Sphere Gallery”.

As the first university museum to install Science On a Sphere, the MSU Museum joins about 150 other locations around the world, including three locations in Michigan: Detroit Zoological Society (Royal Oak, MI), Great Lakes Maritime Heritage Center (Alpena, MI), and Kalamazoo Valley Museum (Kalamazoo, MI). The MSU Museum version of the sphere will be unique in that MSU faculty and students, as well as partnering K-12 classes, will develop and author new content for the system.

MSU Museum Director Mark Auslander observes, “For many years I have been entranced by NOAA’s Science on a Sphere systems at museums and science centers around the country. I am thrilled that due to MSUFCU’s generous challenge gift, we are well on the way to bringing this extraordinary system to the Lansing area and to the MSU campus. I am confident that MSU students and our K-12 student partners in the region will be able to develop original, creative presentations to project on the sphere, allowing our visitors to engage in exciting explorations of science, culture, and the arts throughout the world.” Auslander adds, “The official name of the system is “Science on a Sphere,” but since we are a museum of both science and culture, we like to joke that the other name of our version of the globe will be “Culture on a Curve.” Whatever name we use, we can’t wait to see it in action.”

On Sunday, October 7, 2018, the Credit Union is once again sponsoring the 33rd Annual MSUFCU Dinosaur Dash. This year, the race will serve as a fundraiser for Science on a Sphere and will celebrate the upcoming UNESCO Year of the Periodic Table, marking 150 years since Dmitri Mendeleev conceived of the periodic table of elements. The race will highlight Iridium (element 77) and its connection to paleontology. A global sediment of iridium, laid down across the earth about 66 million years ago, offers strong scientific evidence for the impact of a massive asteroid on the earth’s surface, contributing to the mass extinction of the dinosaurs. Participants are encouraged to wear imaginative costumes evoking dinosaurs, asteroids, or element 77.

The MSU Museum aims to open the Science on a Sphere gallery in October 2019.