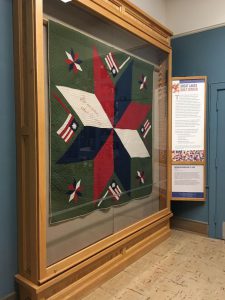 The inscription on this quilt, “War was declared,” refers to the Spanish-American War of 1898. This conflict originated in Cuba’s fight for independence from Spain. Calls for military intervention by the United States rose after the sinking of the USS Maine in Cuba’s Havana Harbor. This event, in this era of exaggerated “yellow journalism,” was quickly sensationalized by newspapers calling for war against Spain. The war’s conclusion ended Spanish colonial rule in the Americas. The United States acquired as territories the Philippines, Guam, and Puerto Rico. The Spanish-American War marked the United States’ entry into global affairs, changing dramatically the nation’s relationship with the world. Read more about this quilt on The Quilt Index.

Your ticket for the: New Quilt on View!