In his October 2019 letter, MSU Museum Director Mark Auslander reflects on the Museum’s new curator of history, Dr. Julian Chambliss, a specialist in black superheroes, and on the museum’s recent award of an important Federal grant, allowing for the rehousing of thousands of animal specimens in our Natural Sciences Division. While seemingly disparate, cultural research into the meaning of superheroes and scientific research into non-human animals have some surprising affinities. For untold millennia, through ritual, art, and storytelling, animals have been foundational to human understanding of our own capacities for heroism. Might it be time for us to return the favor, in the interest of biodiversity and species protection?

The Museum enters autumn with several delightful developments: a new curator, a significant “Afrofuturist” art acquisition, and an important Federal grant for stewarding our vertebrate collections. All these events, in one way or another, celebrate the power of creative recombination or “re-mixing” in the interest of innovation and discovery. All, in turn, can be related to the ancient paradigm of the superhero in human thought.

First, we are thrilled to welcome on board Dr. Julian Chambliss as our inaugural Val Berryman Curator of History. Our late history curator Val Berryman, who worked at the Museum for half a century, was renowned for his imaginative collecting and his boundless curiosity. The Berryman Endowment is anchored in a generous bequest from his estate, supplemented by further gifts from Val’s friends and supporters; we are so pleased that Dr. Chambliss will be building upon Val’s important legacy in the years ahead.

Dr. Chambliss, a distinguished scholar in the MSU English Department, arrived at MSU last year from Rollins College in Florida, where he had established a formidable reputation as a specialist in real and imagined cities. He’s deeply interested in what he terms the “Black Fantastic” — speculative traditions in African American thought that encompass such genres as Science Fiction, Hip Hop, comics, superhero pop culture, interactive games, and the literary and artistic movement known as “Afrofuturism.” At the MSU Museum, Julian will be leading our collecting and research initiatives around these cultural and aesthetic movements, while also working closely with the whole museum team on developing integrative approaches to environmental studies and climate change. With artist Rachel Simmons, he’s the writer of the wildly imaginative graphic installation “FutureBear” chronicling a highly evolved polar bear (possessing gills and empathic telepathy) who travels from the future back in time to teach those of us dwelling in the present day about climate science and the vital necessity of altering human-derived carbon output.

As Dr. Chambliss reminds us, FutureBear is heir to a long line of superheroes in the modern popular imagination, figures who simultaneously evoke both our deepest aspirations and anxieties, including our ambivalence over science, technology and the complex dynamics of hyper-urban life. Superman is the quintessential immigrant who navigates longing for acceptance and knowledge of his own difference. Not by coincidence, many of the great superhero comic book creators were Jewish Americans. Like so many recent immigrants they were fascinated by the shape-shifting challenges of assimilation, of being simultaneously inside and outside of dominant society, both citizens and quasi-exiles within their adopted homeland. Like ancient classical heroes, their strengths and tragic flaws were immeasurably magnified as they sought to find a place in a world that alternately honored and scorned them.

The figure of the superhero typifies what the pioneering African American sociologist W.E.B. DuBois long ago termed “two-ness” or “double consciousness”, the uncanny sensation of existing both within mainstream society and on its margins. DuBois famously characterized this sensation, as experienced by African Americans, as living both outside of and within “the veil” of racial and ethnic classification. The veil, which descends intermittently, is exceedingly difficult at times to disentangle from one’s sense of self. Appropriately, many superheroes (from Batman to Catwoman to Iron Man) are masked, behind their own special “veils.” As we learn in episode after episode, it is notoriously tricky to separate mask from hero. Every superhero worth their salt has a crisis of selfhood, a profound moment of doubt that may catalyze radical transformation and character development; no wonder that children and teens (and those forever young at heart) are so drawn to the figure of the superhero, torn between inner potential and external expectations, behind the mask and beyond the veil. 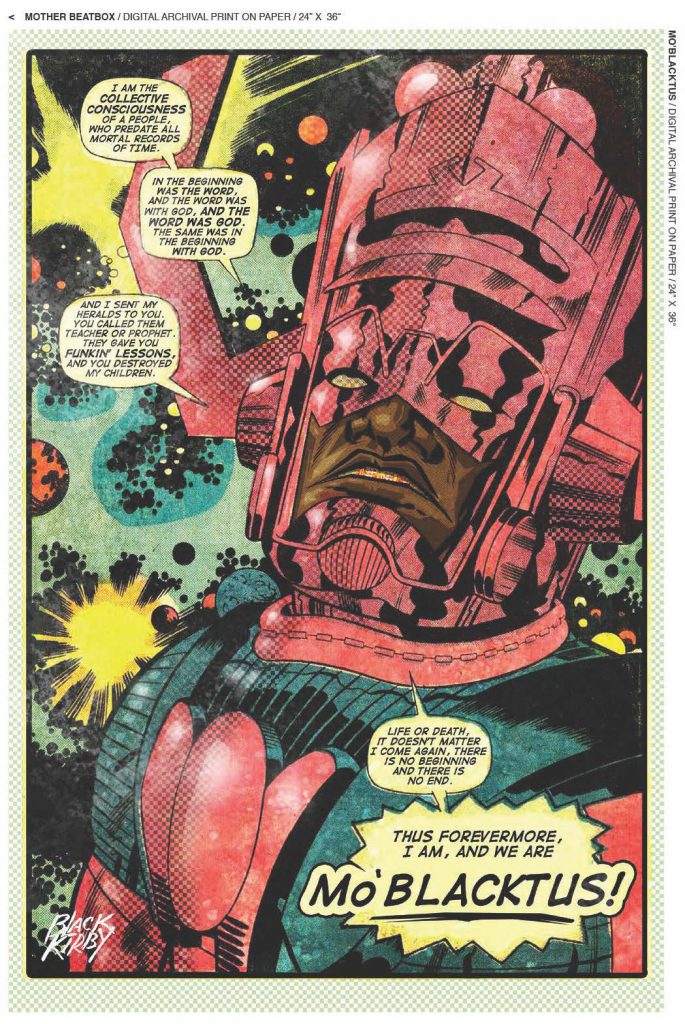 Black Kirby to the Rescue

Friday, September 27 saw the unveiling at the Museum of four dazzling prints by the arts collective “Black Kirby,” composed of artist-scholars Stacey Robinson and John Jennings. These works are the first selected for acquisition at the Museum by Dr. Chambliss, wearing his hat as the Val Berryman Curator of History. The duo’s nom de plume, “Black Kirby,” is homage to Jack Kirby, the co-creator of X-Men, Captain America, and Black Panther, while also honoring the heritage of African American comics, music, and pop culture. Drawing their inspiration from Hip Hop, the Black Kirby artists are masters of sampling and remixing. They continually rearrange and reconfigure the collective cultural DNA of the African American historical experience, with verve, swagger, and humor. To my mind, they are among the most brilliant explorers of DuBois’ foundational concept of two-ness or double consciousness.

Take, for example, one of the newly acquired prints, “Mo’ Blacktus” (2012). A black male figure, re-imagining the iconic Galactus, the famed Fantastic Four antagonist. In the hands of Black Kirby the image is given new life and purpose. He speaks to us from somewhere out in the cosmos, wearing headgear that we see anew cast beyond its Marvel origins and now in conversation with Baule masks from West Africa’s Ivory Coast, Ancient Egyptian pharaonic crowns, a football helmet and perhaps a DJ’s headphones tuning in the mysterious frequencies of the universe. In prophetic voice, the masked figure reprimands mortals for failing to honor his emissaries’ “Funking lessons.” He concludes, “Thus, Evermore, I am, and we are, Mo’ Blacktus.” The image is both hilarious and exhilarating, remonstrative and inclusive, as it takes us on a dazzling cosmic journey from African spiritual utopias through the twists and turns of modern black popular culture. We may all be found wanting, having failed to truly embody funkiness, but we are still, generously, included in the final “us” of “Blacktus.” The mask, it would appear, encompasses everyone, or at least all people of color, within its capacious, timeless reach.

IMLS to the Rescue 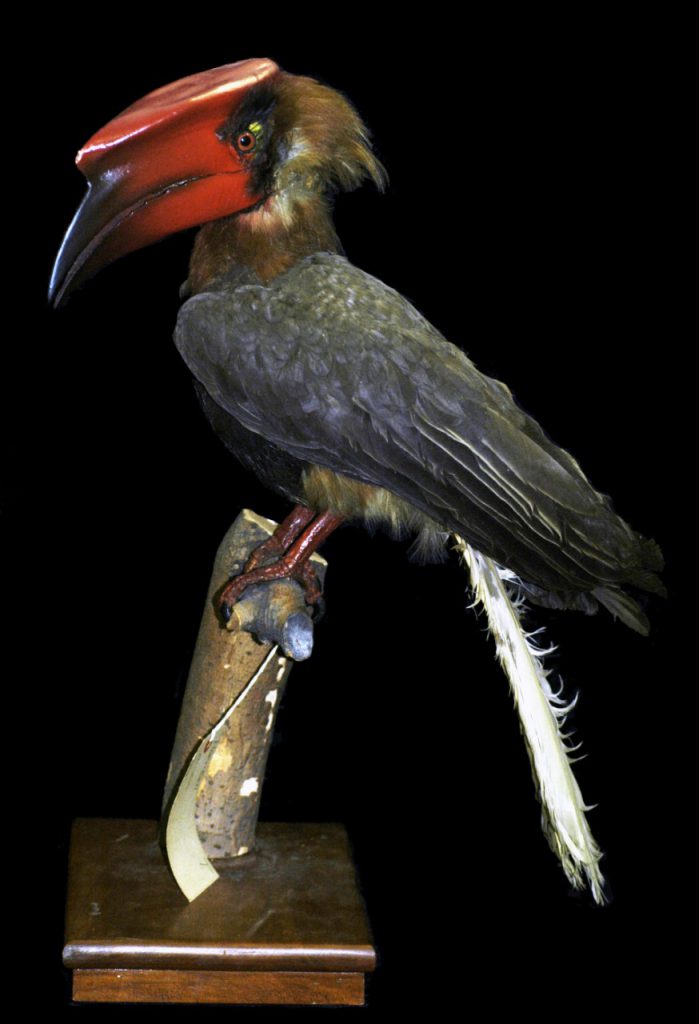 A taxidermy-mounted Rufous Hornbill (Buceros hydrocorax) was donated to the Museum in 1917 by Mr. J.H. Tibbs (class of 1912). The focus of the grant project is to improve environmental conditions and accessibility of over 5,600 bird and mammal specimens that are preserved as taxidermy mounts, tanned skins, study skins, or skeletons in the MSU Museum. Photo by Barbara L. Lundrigan

Just as we acquired the Black Kirby prints, we received the wonderful news that the Museum’s Natural Science Division has been awarded a substantial grant from the Institute of Museum and Library Services (IMLS) Museums for America program. The grant will support the rehousing and preservation of 5,600 important mammal and bird specimens in our collections, some of which date to the early days of the museum. The specimens include taxidermy mounts, tanned skins, study skins, and skeletons that are currently crowded in less than optimal conditions. They’ll be moved and rehoused in new cabinets and shelving units with museum-standard archival supplies and materials. As the funded work is completed, students and researchers will be able to study these preserved organisms more thoroughly, with less risk of damaging them. The successful grant is testimony to the hard work by our vertebrate collections manager Laura Abraczinskas and Curator of Mammals and Birds Dr. Barbara Lundrigan, who will oversee this important project during the next 2 ½ years.

At first glance, the specimen rehousing initiative may seem a far cry from the pulsating graphic storytelling of Black Kirby. Yet, as I walk through our “behind the scenes” vertebrate collections, I find myself filled with a sense of wonder that seems uncannily to resonate with John Jennings and Stacey Robinson’s artistic vision. Animals of all shapes and sizes peer out at us, hinting at insights that we must work hard to decipher. Animals were the first superheroes, inspiring mythology and fantastical storytelling the world over. For indigenous peoples, animals and humans are closely linked cousins, and at times may transform into one another; ancient human-animal chimeras anticipate modern hybrid fantasy figures from Wolverine to Teenage Mutant Ninja Turtles to the Black Panther himself. In our natural science collections or in the realm of mythic storytelling, through contemplating beings whom are not human, paradoxically, we come to better understand the constraints and possibilities of being human.

In many human societies, masks are carved to honor the power of animals, who many lend their spirit or soul temporarily into the body of the masked dancer, and who are in turn strengthened and reproduced through the devoted energies of human performers. Similarly the traditional reciter of mythology continually selects and rearranges observed characteristics of animals to make profound points about the universe and our place within it. Through these intimate transactions across different domains of creation (human/animal or visible/invisible) the masquerader and singer of tales disseminates profound insights about existence to kith and kin.

This ancient fascination with animals, as foundational to an exploration of the predicament of being human, strikes me as not too far removed from the spirit of modern scientific inquiry, which drives our colleagues across the life sciences. They too are obsessed with contemplating sameness and difference across the tree of life. In their own way they continuously engage in sampling and remixing as they develop comparative understandings of organisms and ecosystems.

As we welcome Dr. Julian Chambliss, a distinguished historian of superheroes, into the MSU Museum family, it thus seems entirely appropriate that we have been awarded a major grant to help preserve and care for our own long-running superheroes, the Museum’s animal specimens, some old and some new. As FutureBear reminds us, we are all intimate kin with our fellow nature’s beings, and the loss of a single species anywhere on the planet diminishes each and every one of us. Now that many thousands of species of living things are estimated to go extinct each year, at the direct or indirect “hand of man,” we do need to ask how many superheroes and superpowers, in effect, are being lost to us, once and for all. Might we, in turn, be inspired by science and by art to find the heroic courage within each one of us to intervene, at this tipping point in the history of life, to save the biosphere for ourselves, our fellow living beings, and our shared posterity? That vital quest just might turn out to be the greatest superhero story of all.

Your ticket for the: Superheroes, Remixed: “Black Kirby” and Re-housed Vertebrates at the MSU Museum