We Never Know How High We Are: “Finding Our Voice” As Creative Canvas

In his May 2019 letter, MSU Museum Director Mark Auslander reflects on some of the unexpected instances of creativity inspired by the Museum’s new exhibition, “Finding our Voice: Sister Survivors Speak.” Although chronicling a history of human rights violation and institutional failures, the exhibit is already proving to be a space in which new voices are emerging, as sister survivors, students, and many others respond to these powerful stories with their own transformative, painfully honest narratives. 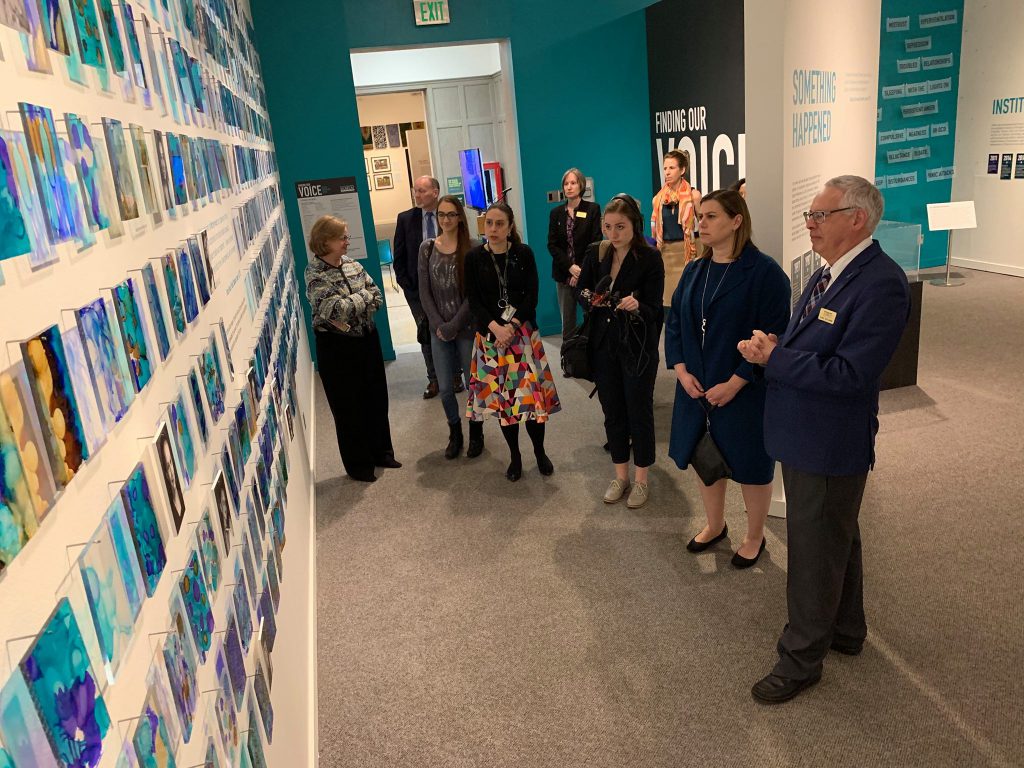 A few days after the opening of our new exhibition, “Finding Our Voice: Sister Survivors Speak,” we were deeply moved to find many quotations and literary passages written in different colors of chalk across the sidewalk in front of the Museum. Our colleague in the Department of History, Erin Graham, had brought her students in Women’s Studies 201 to view the exhibit. Afterwards, student Anna Elliott, suggested the whole class should share favorite quotes in chalk. Student Maggie Orlando carefully wrote out the first stanza of Emily Dickinson’s beloved poem.

“We never know how high we are Till we are called to rise; And then, if we are true to plan, Our statures touch the skies—”

It had been our deepest hope, as the Museum team joined with the Survivors and Allies Advisory Council in collaboratively co-curating “Finding Our Voice,” that the exhibition would not simply be viewed as a completed entity but would rather inspire creative interventions by diverse interlocutors. We were all gratified to see Dr. Graham’s students encounter the exhibition in that spirit, adding their own written interventions, turning the pavement in front of the building, as it were, into an emerging canvas or blank page. Out of a proximate history of pain and injustice, new voices are being called to come forth.

Dickinson’s poem resonates in fascinating ways with the narratives and art works showcased in the exhibition.  In January 2018, over 150 survivors of this dreadful crisis of sexual violence were “called to rise,” courageously offering testimony in the victim impact phase of the trial.  As their words of anguish and of uncompromising truth were broadcast and re-circulated around the world, their statures, whatever their physical heights, really did seem to “touch the skies.”

That transformation is commemorated in Jordyn Fishman’s 21 foot triptych painting, “Together We Roar, Pt. 2.” At the start of the sequence the gymnast figure is entirely subordinated within the gaze of a video camera and the competition judges, under the all-powerful logo of USA Gymnastics. As the work proceeds through chapters of bodily violation and suffering, the gymnast reappears roaring defiantly, increasingly existing on her own terms outside of anyone else’s definitions. In the final panel she and her sister survivors have risen to the top of the canvas and are actively disassembling the USAG logo, charting their own paths forward.

A similar upward drama is honored in Alexandra Bourque’s sculptural installation, “Transformed into Butterflies (Ten Feet Tall),”  with which the exhibition concludes. Three hundred silken hand- dyed butterflies swirl around a female figure, clothing her in a beautiful dress before they fly up towards the heavens. At a recent roundtable on art and healing in the Museum, Alexandra explained that the work had been created during a period of illness, an enduring legacy of that which had been perpetrated against her. During this period of struggle, she recalls, “the art found me”: making this powerful work, willingly subordinating herself to the quiet rhythms of artistic creation, proved to be a form of creative self-fashioning.

Themes of ascent through an interior landscape of pain and hope also inform Elena Cram’s deeply engaging three-part tapestry, “Emergence,” installed adjacent to Alexandra’s butterfly dress.  In a recorded dialogue with Ellen Schattschneider (now available in the exhibit’s mobile phone tour), Elena explains that the first panel evokes a phase of stasis or equilibrium, in which in the wake of trauma one manages, in a partial state of numbness, to endure each day, even if one is cut off from the full range of life’s experiences. The second panel seems to signal a process of transformation, familiar in therapy, as long-submerged arcs of pain, here evoked by shard-like red-brown elements, begin to manifest themselves. In the third panel earlier hinted-at colors begin to coalesce, in an assemblage reminiscent of a sunrise, as we are bathed in warm promise of a new day.

How it Feels to Sing

On April 12, the Museum hosted a closed preview opening of Finding our Voice, restricted to sister survivors and their loved ones. Perhaps the most remarkable moment came when musician sister survivor Amanda Cormier premiered a new song, which she had written only days before.  A little more than a year earlier, during her own victim impact statement, she had shared her fear that she might never be able to write a song again. That evening, in front of her fellow sister survivors, she took us on a musical journey, along a pathway that seemed reminiscent of that explored by Elena, Alexandra and Jordyn in visual form:

“Sometimes I feel nothing at all
Numbness the strength of my walls, sometimes
Sometimes all I can hear is the screams
All part of some big bad dreams, sometimes.

Her beautiful voice, soaring above the dinosaurs of Habitat Hall, really did seem to “touch the skies.”

Perhaps the most puzzling aspect of Emily Dickinson’s famous poem is the phrase, “if we are true to plan.” The poem, after all, is dedicated to how we rise in the most unexpected of circumstances, when external forces call upon us, without fair warning, to exceed our own conventional expectations of ourselves. These are moments we simply have not planned for. One thinks of the stories shared by many sister survivors of how they hurriedly wrote their draft impact statements on mobile phones, while being driven to the courthouse, unsure until the final moments if they really would speak, or what precisely they would share with their loved ones and with the world. Each of the artists in “Finding Our Voice” reports that her process did not proceed according to a fully preconceived plan but was rather marked by many unexpected twists and turns.

By “plan,” Dickinson presumably does not reference our own conscious intentions, but something greater than ourselves, which in her day might have been conceived of as Providence or “the divine plan”. The deepest plan for whom we ought to be, the very scheme which we ourselves so often fight against, is realized by embracing the nascent, so often unrealized potentials within our inner beings. As she concludes the poem, in language redolent of the Old Testament:

“The Heroism we recite
Would be a daily thing,
Did not ourselves the Cubits warp
For fear to be a King—”

In scriptures the world over, pivotal figures struggle with moments of self-doubt, when called unexpectedly to greatness. So too for the sister survivors celebrated in “Finding Our Voice,” who each responded to the call when it came in their own singular, irreducible fashions.

A few hours after Dr. Graham’s students had filled the Museum’s pavement with quotations, other students gathered in the Museum atrium to hold a spoken word poetry showcase dedicated to survivors, brilliantly curated by student Grace Carras, an intern with the RCAH Center for Poetry. Many of the poetic voices were raw and filled with pain, alluding to personal and collective sagas of violation and enduring struggles towards recovery. Yet amidst the tears, there were profound moments of laughter and joy—born of the sense of fellowship that comes of being in the presence of shared truth telling, suffused with the deep sense of being attuned to one another through the mysteries of artistic creation.

“Finding Our Voice” will be open for a year. We look forward to discovering, in future moments of truth telling, in the gallery, on the sidewalks, and other unexpected places, what new voices will emerge on its experimental, unfinished pages.  With Amanda, let us all remember how it “feels to sing.”

Your ticket for the: We Never Know How High We Are: “Finding Our Voice” As Creative Canvas

We Never Know How High We Are: “Finding Our Voice” As Creative Canvas